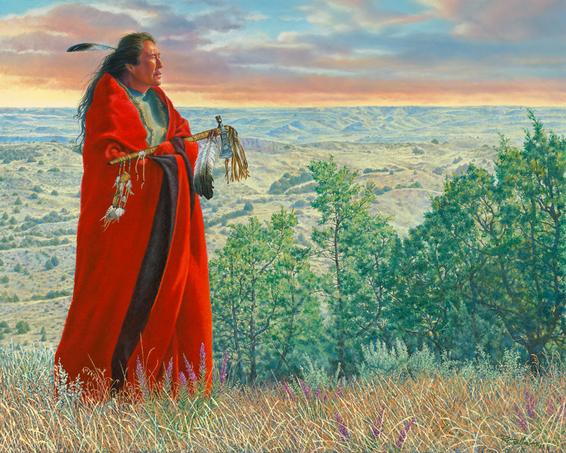 Have you ever said "bury the hatchet" and wondered where the phrase came from? In the late 1600's a journalist was traveling with traders in the New World and writing stories of his experiences for the European newspapers. He witnessed a meeting of Native Americans in a tipi where the elders were settling a dispute. When the two disputing parties came to an agreement, the elders said to bury the hatchet. So after smoking a peace pipe and passing it among the group stating the agreement, the two parties took a hatchet outside and buried it in the earth and each one stomped on it to make the agreement permanent. As men of great honor, they were committed to this agreement for life. The phrase caught on in Europe as the story spread because they could not imagine that these "savages" could be such honorable men. It has been used for hundreds of years now when settling arguments.

A PAINTING THAT TURNS HEADS

The title of this painting is Where Buffalo Roam, and it has become my most popular painting. Everywhere I go, someone says this painting speaks to them. It tells the story of the Plains Indians quest for buffalo and their life on the wide open prairie. The Native Americans believed that land should not be owned by anyone and that all creatures including humans shared the earth and its bounty. This painting conveys that harmony between man and earth. As simple as this painting is, it speaks volumes about the lifestyle, beliefs and history of the American Indians.

"The American Indian is of the soil, whether it be the region of forests, plains, pueblos, or mesas. He fits into the landscape, for the hand that fashioned the continent also fashioned the man for his surroundings. He once grew as naturally as the wild sunflowers, he belongs just as the buffalo belonged...." - Luther Standing Bear, Oglala Sioux Chief

"Being Indian is an attitude, a state of mind, a way of being in harmony with all things and all beings. It is allowing the heart to be the distributor of energy on this planet; to allow feelings and sensitivities to determine where energy goes; bringing aliveness up from the Earth and from the Sky, putting it in and giving it out from the heart."  - Brooke Medicine Eagle

"The land is sacred. These words are at the core of your being. The land is our mother, the rivers our blood. Take our land away and we die. That is, the Indian in us dies." - Mary Brave Bird

"I was born upon the prairie, where the wind blew free, and there was nothing to break the light of the sun. I was born where there were no enclosures, and where everything drew a free breath...I know every stream and every wood between the Rio Grande and the Arkansas. I have hunted over that country. I lived like my fathers before me, and like them, I lived happily.” - Ten Bears [Parra-wa-samem] (late 19th century) Yamparethka Comanche Chief

"I have heard you intend to settle us on a reservation near the mountains. I don't want to settle. I love to roam over the prairies. There I feel free and happy, but when we settle down we grow pale and die.” - Satanta, Kiowa Chief 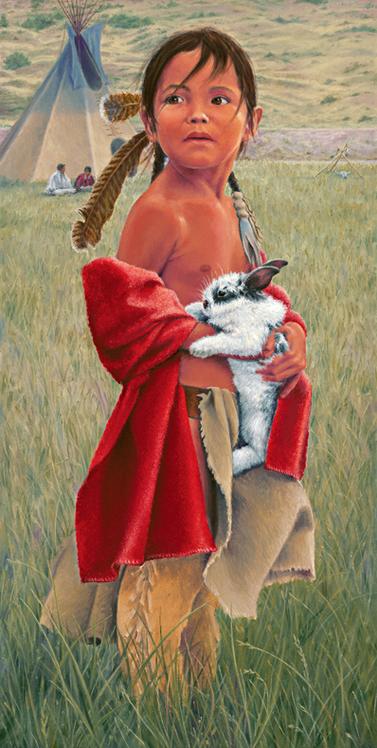 This painting has really become a favorite of mine. The title "Nature's Lessons" refers to a common lesson that most children experience—a first pet and caring for a living creature. What better teacher is there than Nature. This scene is taking place in the Old West in the 1800s, but this same situation could be taking place today with a different background and a young boy (or girl) in any country or any culture.

I took the photograph, that was the reference for this painting, while at the Artists Ride in South Dakota. This little Lakota boy was playing with his brother when his father brought the bunny over and handed it to him. He was carefully holding it under its legs with it cuddled up against his chest. All of a sudden the bunny tried to jump out of his hands and its toenails scratched the boy's belly. He caught the bunny under its front legs and whipped his head around to catch his father's attention with a surprised look on his face. . . that's when I got the picture. I liked the turn of his head and the anxious look on his face. Back in my studio, I created the painting's composition, adding the scene in the background and changing the blanket from white to red. I worked hard to produce the subtle tones in his skin and the gleam in his eyes. He truly comes alive in the painting.

My original reference photo for this painting was taken in South Dakota on a sunny day with a bright blue sky. I liked the riders on the ridge but I thought I should do something more dramatic with it. I changed the sky to a the dusty golden brown with hints of vanilla and orange and made the warriors almost in silhouette to give it a look of a long hot day ending with the sun going down popping through the clouds and dust. Last light of day.

Art of the American West