Art of the American West

Historical Questions of the Old West—1830s
Title: Death of a Nation. This is my largest painting at over 5 feet x 8 feet framed!

It is a commission which started with an interest in medicine men and developed into a story about the smallpox epidemic in the 1830s that killed thousands of Native Americans. The U.S. Army was charged with trying to poison the Indians by infecting the Cavalry blankets that were so popular as trade items with the tribes. The official conclusion was that an American Fur Company steamboat traveling up the Missouri River brought the infected passengers that passed on the disease.

There were an estimated one million Indians living north of the Rio Grande in the early sixteenth-century. By the end of the sixteen hundreds, smallpox had spread along the eastern seaboard and west to the Great Lakes and by 1907 there were less than four hundred thousand Indians. Smallpox was the key killer along with other diseases, intertribal warfare, and conflicts with the United States.

Smallpox was allegedly used as a weapon earlier in history. This was the infamous case of General Jeffrey Amherst in 1763 who was in command of troops in the Ohio area. Certain native tribes in the area had become increasingly hostile. In response, the general wrote a letter to a subordinate outlining a plan to "Extirpate this Execrable Race" via the dispensation of smallpox-infected blankets. In a footnote of a letter (July 16, 1763) to Colonel Bouquet, Lord Amherst wrote: "Could it not be contrived to send the Small Pox among those disaffected tribes of Indians? We must on this occasion use every stratagem in our power to reduce them." A smallpox epidemic spread and some tribes were completely wiped out.

The Mandan were first plagued by smallpox in the 16th century and had been hit by similar epidemics every few decades. Between 1837 and 1838, another smallpox epidemic swept the region. In June 1837, an American Fur Company steamboat traveled westward up the Missouri River from St. Louis. Its passengers and traders aboard infected the Mandan, Hidatsa and Arikara tribes. There were approximately 1,600 Mandan living in the two villages at that time. The disease effectively destroyed the Mandan settlements. Almost all of the tribe, including the chief, Four Bears, died. Soon, the disease spread to 500 lodges of Blackfoot and Piegan (some 5,500 people) at Fort McKenzie. It is estimated that 75% of the Plains People died 1837-1838 from smallpox.

In the earliest detailed study of the event, in The American Fur Trade of the Far West (1902), Hiram M. Chittenden blamed the American Fur Company for the epidemic. Oral tradition of the affected tribes continue to claim that whites were to blame for the disease. R. G. Robertson in his book Rotting Face: Smallpox and the American Indian places blame on Captain Pratte of St. Peter’s for failing to quarantine once the epidemic broke out, stating that while “not guilty of premeditated genocide, but he was guilty of contributing to the deaths of thousands of innocent people. The law calls his offense criminal negligence. Yet in light of all the deaths, the almost complete annihilation of the Mandans, and the terrible suffering the region endured, the label criminal negligence is benign, hardly befitting an action that had such horrendous consequences."


Death of a Nation is now hanging in a beautiful home —I would love to create a large MasterWork commission for your home or office.

These are just two of many large, complex paintings that took a lot of time and effort to produce, that are commonly referred to as MasterWorks. 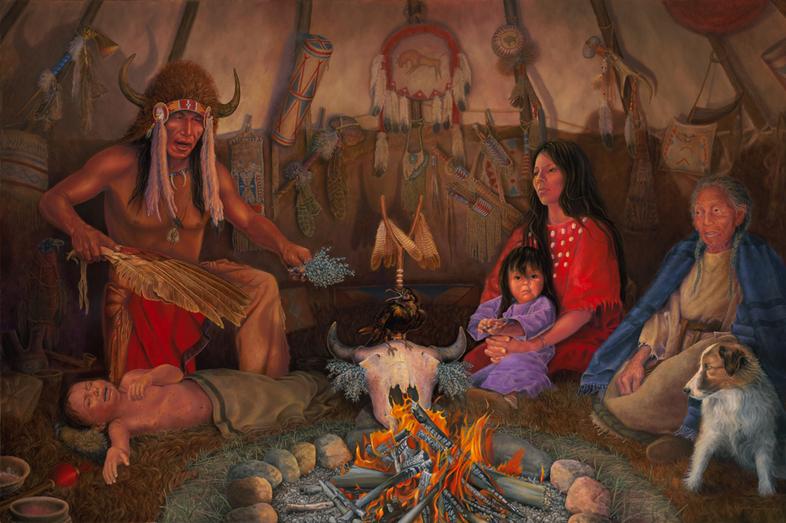 A Twist on the Traditional Mountain Man Depiction

Mountain men were the toughest of the tough. But sometimes Nature has a way of balancing the power. The two raccoons in the window are watching the trapper as he gets ready to leave on another hunting journey. While he is away, they always ransack his cabin home. Possibly in revenge for him killing their relatives that you can see hanging as souvenirs on his outfit. He can never catch these two young rascals. A story of the old West told through a painting that will last forever. This MasterWork is a large 48" x 48" oil painting with a ton of detail and texture. 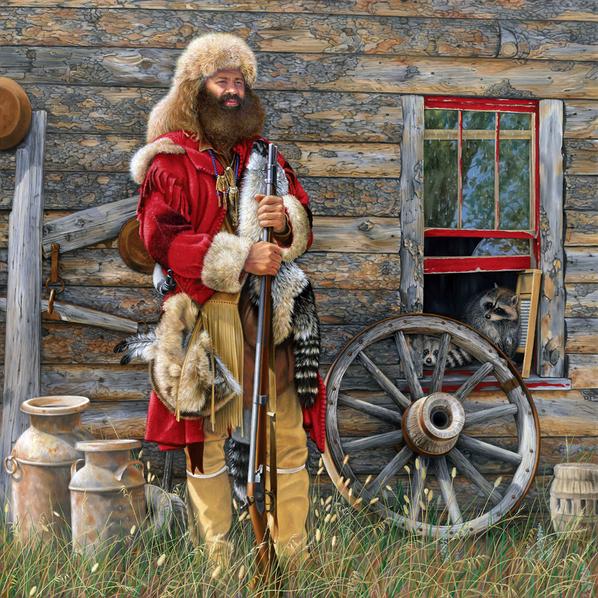